Using her talent for capturing children’s perspectives and using recent interviews with children themselves, during lockdown Cheryl Moskowitz has been writing a brand new collection of poems. The Corona Collection – A Conversation records their thoughts, questions and experiences while they live in a world turned on its head by the coronavirus pandemic.

She asked them these questions: Suppose you woke up tomorrow and it was a corona-free world, restrictions all lifted. Where would you go? What would you do? What new rules, if any, might you put in place for a safer, happier world? Funny, touching and affecting, these poems form a unique record of children’s thoughts and feelings in a period in which our lives were turned upside down.

This collection was published with Pop Up Projects as a special edition for schools taking part in our programmes in 2020.

This is a video resource designed to be used alongside the reading of Cheryl Moskowitz‘ poetry collection, Can it Be About Me?. The resource encourages pupils of all ages and abilities, and their teachers, to use poetry as a creative form of self- expression, communication and sharing of ideas.

London 1800. Jupiter is young, black, living at the African Academy in Clapham with other boys from wealthy Sierra Leonean families. His life is a mixture of privilege and dispossession as he copes with the cruelty of his teachers, the rivalries and tensions among his schoolmates, a sense of duty towards his younger brother Robert and guilt over the death of another brother in Africa. Throughout, Jupiter strives to maintain his dignity, his Christian faith and pride in his roots.

But beyond the relative ease of Clapham lies another London, where poor black communities struggle for survival along the squalid reaches of the Thames. A world where Jupiter’s education and background mean nothing and skin colour alone determines fate. Into this world his younger brother Robert vanishes, and Jupiter is obliged to follow …

A collection of short stories – four previously published and three new – linked by the theme of young people experiencing personal dilemmas. All are set in South Africa, first under apartheid and then after the first democratic elections. They cover the period from 1950 to 2000 and reflect the lives of a range of young people, black and white, living in what was for many years seen as the world’s most openly racist society.

The poems have been carefully selected to chart the poet, Hulme’s journey from growing up in a working-class family in Leicestershire to his feelings and thoughts about school life and his experience as a transgender teenager. As Hulme says himself: “When it was decided that this collection would be for teenagers I was left with this determination, that this collection wouldn’t speak down to anyone, that the world I portrayed within it would be the world we live in, that there would be no attempt to make reality ‘appropriate for children’. People seem to forget that teenagers live in the same world as everyone else, and they face the same struggles adults face every day. Teenagers deal with racism and sexism and disability and poverty and so much more that we don’t even see. The things that are traditionally seen as inappropriate for young people to see, are so often the same things they experience day to day.”

From the heroes familiar to everyone, such as Malala Yousafzai, to the amazing activists you might not have heard of, like Baruani Ndume, the teenager who gave a voice to fellow refugee children in Tanzania, discover the incredible true stories of child activists.

An inspirational and moving book from beloved author-illustrator Marcia Williams, providing the perfect introduction to an important subject and marking 30 years since the Convention on the Rights of the Child was signed by the United Nations General Assembly.

Why Comics? are the educational arm of Positive Negatives, an innovative organisation producing comics about current events and issues around the world, bringing together talented graphic artists and real-life testimony. Each comic is linked to resources you can use in the classroom, and can be a rich addition to your literacy, humanities or SMSC curriculum. 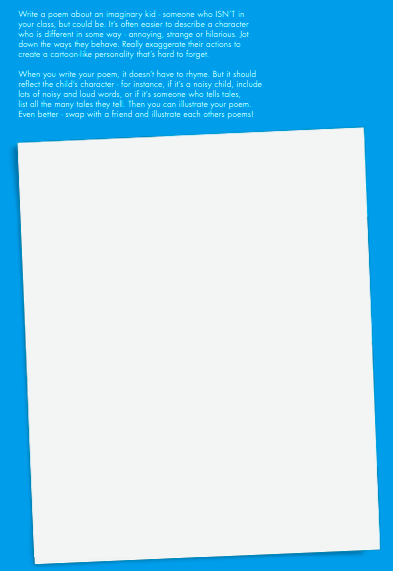