Hello, I hope you enjoy using my resources.

Please note, Star Dancer is currently being re-printed, and should be available in January 2020.

This resource is in two parts.

Part 2, below, is notes to help your class dream up and structure writing ideas using the same process.

Part 1, which you can find here, is an outline of how I thought of Star Dancer and put it together – with photos of places and things that inspired me.

How to create a story using setting

First, find somewhere interesting to write. It can be out in the open: 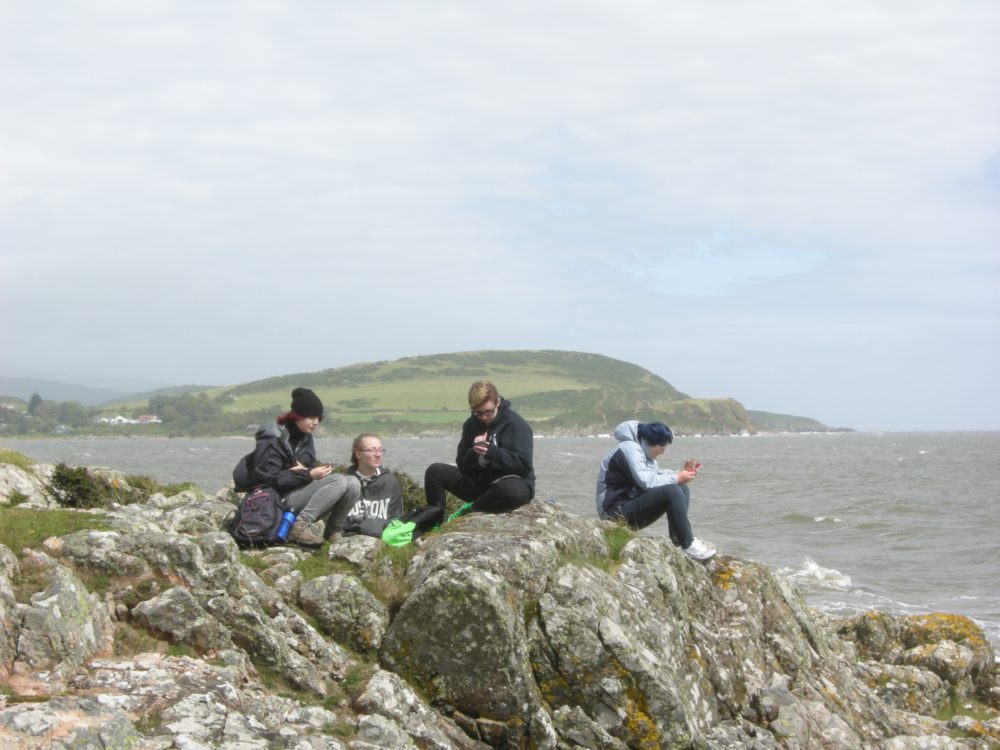 Or visiting a country house: 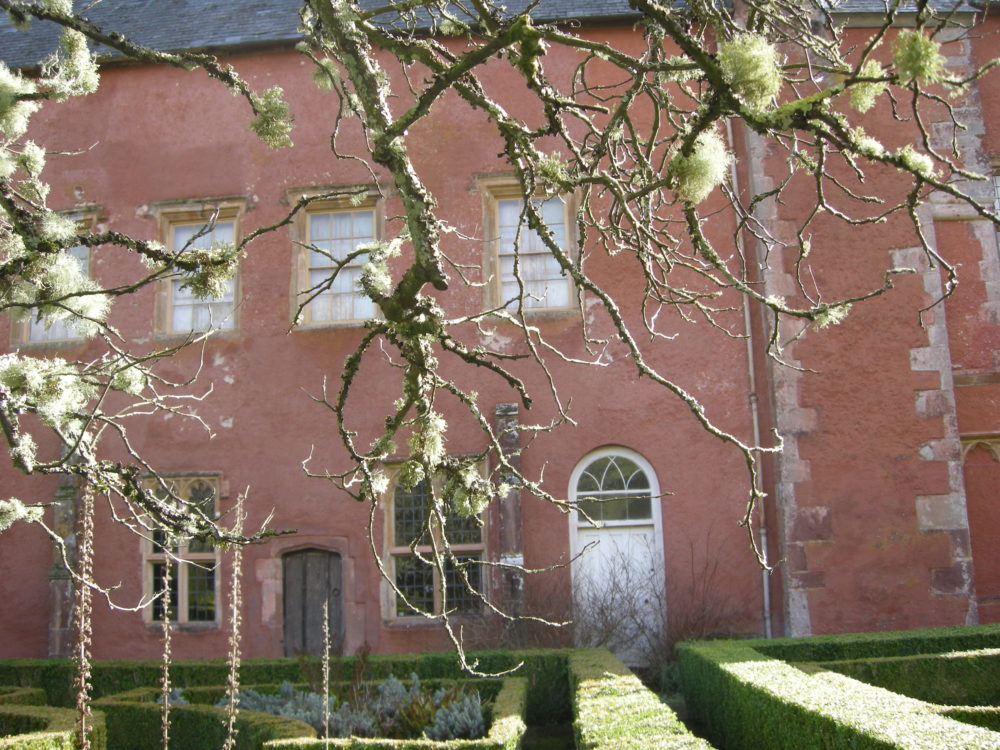 Next, imagine yourself as someone who might live or work there.

Take time to put yourself into that person’s life. Do some research, what was their life like? What did they eat or drink, what did they wear?

Try dressing up as your main character. Wearing long robes or hooped skirts changes how you walk and move. Oddly enough, it also changes how you think of yourself. Try it, get long dresses, cloaks or robes from a charity shop or the school drama department.

Wearing long woollen druid robes like mine make running difficult, but they do keep me warm and dry, even in awful weather.

Would your characters walk everywhere? Or would they have travelled by boat or horse? Tegen and Griff had to cross the Somerset marshes by trackways made out of woven sticks, or by coracle.

I don’t suggest you try this, but when I was writing Star Dancer, I was struggling with a scene where Tegen loses her shoes in muddy snow. The following day I was out walking and I got stuck in sucky-snowy mud and lost my boot. The experience really helped me write that scene!

Imagine yourself actually doing all the things your characters do. Go to museums and re-enactment days, try cooking and eating food your characters would recognise. (There are lots of useful websites for every historical period and culture). Get a real feel for what your character’s lives would have been like in detail.

BIG TIP: Once you’ve chosen your setting, take the time to sit still, then one by one use all your senses. If your story is a modern one, you can think of things as they are, but if you’re working on something historical, take care to remember the feel of rough woollen clothes and maybe walking bare-footed, even in winter. Your character will probably have head lice and terrible spots – even if they’re rich.

Remember your research into the taste and textures of their food and the stream water they’d drink (don’t try this one either, just imagine).

Don’t forget to make notes! (Nag nag – but it is important!)

Look up the social history of the times your story is set. Think about whether your character is rich or poor and what their home would have been like. Did they feel safe? What sort of problems and dangers would their world offer? For example, if you were a woman or a serf (a semi slave) in the middle ages, you’d have had a pretty hard life. But even a rich nobleman would have had to obey the king – and the king probably lived in fear of being murdered, so no one’s life was easy and safe.

Next, Would your character have been treated well or badly by their family or those around them? Who might care for them or abuse them?

Why? In Star Dancer, Griff was abandoned as a tiny baby because he has Down’s Syndrome, and his mother thought he was ‘useless.’ Tegen’s parents adopted him out of compassion, but they also believe he’ll be a good worker if carefully taught. In the end, they learn to love him.

Give your main character a real problem

Think about how people with physical and learning disabilities may have been treated in the world you are creating. How are people of fluid gender or in same-sex relationships treated? Might your character be one of these? Some societies have a great deal of respect for people they perceive as ‘different’, these people are believed to be closely in touch with their gods or ancestors. Other societies (like the Nazi regime) treated people who weren’t perfect in body, mind, or who weren’t cis-binary as outcasts. They saw them as less than human, to be disdained, experimented on, then put in the gas chambers.

In Star Dancer, Griff has Down’s Syndrome, but he is far from stupid. He’s also the best man in the whole village because of his love, loyalty, insights and dignity. So why did people belittle him? If your characters have problems, think about how they are treated.

Consider Griff’s part in the story, could Tegen have done what she did without him? By the way, Griff is based on a real person I had the privilege of knowing once. Nothing about him is made up. Think about really interesting people you know; do they give you ideas for the characters in your story?

I think it’s interesting if a story character has a problem like a disability, someone is prejudiced against them, or they face life difficulties like being bullied. These give the story depth and make it more ‘real’ so people can relate to the story. No one wants to read about people who are perfect. In the next book, Fire Dreamer, Tegen travels with Owain who has a broken leg which hasn’t set properly, the injury changes his entire life. Like Tegen, Owain also struggles with prejudice, especially in Stone Keeper (book 4). Tegen also faces bullying and attempted rape from Gorgans, and Derowen bullies both Griff and Tegen – there seems no escape.

You could also think about giving your character moral quandaries. Tegen and her companions such as Griff, Kieran and Owain face these in every book.

Whatever problem you give your character, make it matter — keep it personal and something your reader can relate to.

Why is your character important?

Why should your reader want to read about your character? What’s important about them? Give them a BIG want or need to drive them on. Again, make sure your reader can relate to it.

Oddly enough, thinking about the ending of your story will help you write the middle. If you know where your character is going, it’ll help you get them there. If they don’t have a big driving goal, they’ll wander around the story aimlessly and you’ll struggle with the ending. I go into this in more detail here:

The Story Stair looks simple, but don’t be put off, it will offer you structure for really complex work. I won’t go into it all here, but here’s a ‘Story Stair’ an ex student was rather proud of: 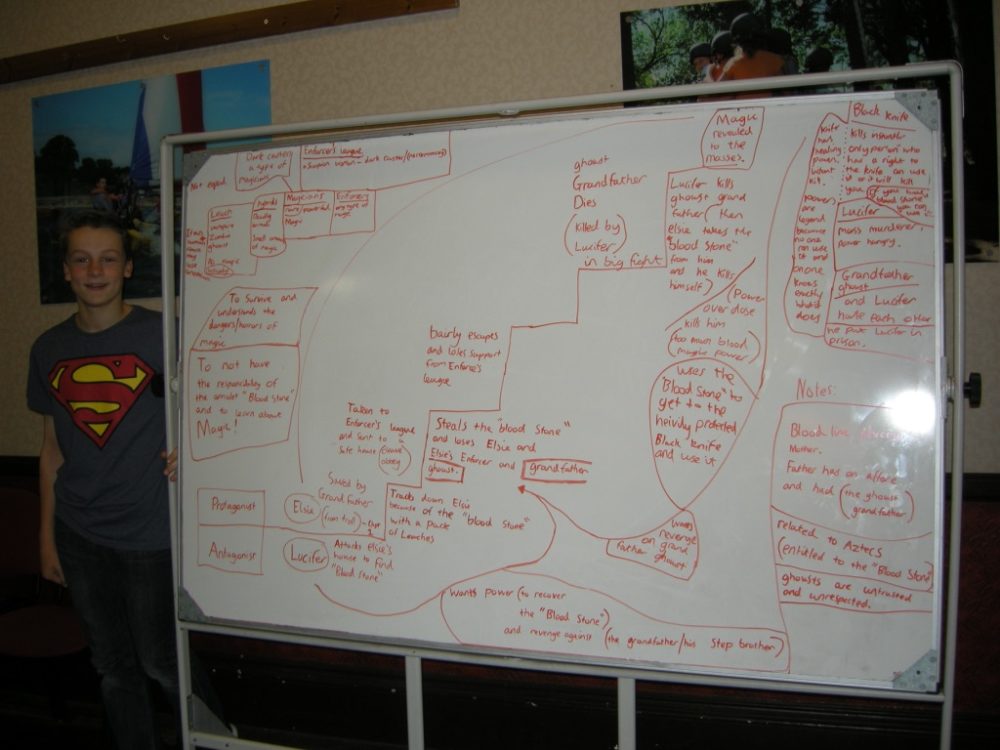 The antagonist or ‘baddie’

Tegen and Griff both face the devious conniving of Gorgans and Derowen in Star Dancer. Before the book was published, my editor asked me why Gorgans and Derowen hated Tegen and Griff so much. I wrote a brief back story for both of them and discovered dramatic depths I hadn’t imaged before; it helped me do some really constructive re-writing. Understanding why people are the way they are makes the story 1000 x better. Try it!

Understanding the antagonist’s drives and goals will again, give the story depth and perspective.

The Twist and the Reveal

It’s always fun to put a twist somewhere into your story. As Star Dancer comes to its climax, we discover that the real enemies aren’t Gorgans and Derowen, and the real threat isn’t the invading Romans, but they are all being used to a darker and more sinister end.

Try teasing your reader a little, allow them to believe they can guess the ending of the tale, then at the last minute, pull back the curtains of your readers’ minds, and reveal a wider picture. BUT you HAVE to drop clues in on the way to hint at what the solution could be – otherwise it’s cheating!

I hope this has been of use, and I look forward to reading some of your stories.

View Part 1 of my resource here