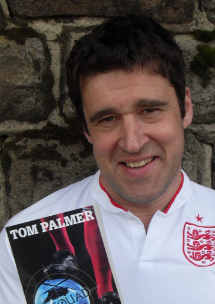 He has written three series for Puffin Books – Football Academy (7+), Foul Play (9+) and The Squad (9+) – and several books for Barrington Stoke, including, most recently, Armistice Runner, which has been shortlisted for 5 book prizes and D-Day Dog, due out May 2019.

He is the author the new Roy of the Rovers fiction series, published by Rebellion.

Tom visits over 150 schools every year to run his Football and Rugby Reading Games, which tie in with his long-term work in reader development. From 2019 his range of school events will include history workshops ranging from WW2, WW1, Viking, Anglo Saxon, Roman and Iron Age.

He has worked around the UK and the world for the National Literacy Trust, the British Council, the Reading Agency, Reading Force, the Premier League, the FA and England Rugby. He is the Writer in Residence at the RAF Museums.

He is the winner of the Solihull and Leicester children’s book awards and was shortlisted for the prestigious Blue Peter Book Award.

Tom lives in Yorkshire with his wife, daughter, dog and cat.