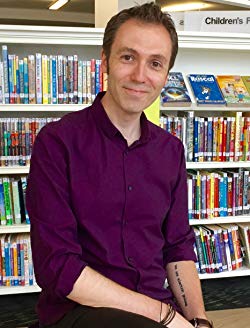 Chris Callaghan is a children’s author responsible for spreading chocolate panic throughout the world (or at least parts of it) and it is reported that he quite enjoys it!

Prior to writing silly stories, Chris was a very serious environmental scientist, where he spent a lot of time on factory roofs (usually in the rain) measuring pollution. He also served in the Royal Air Force as an aircraft engineer, but he still thinks that flying involves a little bit of magic.

You can socially interact with Chris (if that is your thing) by seeing his tweets on Twitter @callaghansstuff, looking at his badly composed photos on Instagram @callaghansstuff or finding out more about his general goings on at www.chris-callaghan.com.

Chris enjoys listening to music, eating wine gums and being the coolest guy in the world. He also enjoys writing his own online bios in the 3rd person.