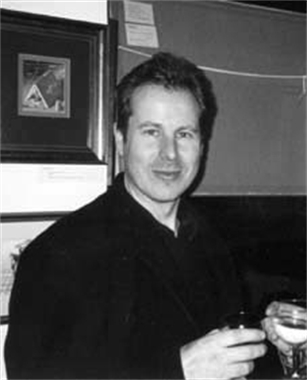 As a freelance illustrator, Bruce worked on a newspapers, magazines and record covers-including Ian Dury’s The Busman’s Prayer. His first book, When Martha’s Away (1995), was a stylish fantasy about the things cats get up to when they get the house to themselves. On becoming an illustrator, Bruce felt the need for a new simplicity. “I came to this work with too much artistic baggage – I had to learn to trust my instinct, to throw out what was unnecessary. It was liberating! Suddenly I felt free to express feelings directly with colour and design, free to simplify the drawing process, not exactly ignoring things like perspective, but not letting them get in the way. You need to know how things are put together before you start taking them apart.” He’s honest about mistakes: “If I make mistakes – anatomical blips for example – I don’t correct them, I just leave them; that way I can preserve the original spark of an idea, and, of course, the imaginative content.” Perhaps it’s these uncorrected mistakes that give a childlike element to his work. “Well that’s not deliberate – it wasn’t until I saw my small son drawing his first pictures that I realised the link between a child’s instinctive approach to drawing and what I try to achieve.”

After teaching in several colleges of art and illustrating for such magazines as Vogue, Bruce’s first book, When Martha’s Away, was published in 1995 to huge critical acclaim. Not only was his book honoured with the National Art Library Award, but Bruce was presented with the prestigious Mother Goose Award as the most exciting British newcomer to children’s picture books. Since then, he has written and illustrated several more children’s books, including Bad News! I’m in Charge!, a sly look at every kid’s wildest dream come true, and illustrated three stunningly original picture books written by Allan Ahlberg: The Runaway Dinner, Previously and The Pencil. Bruce lives in London, UK.